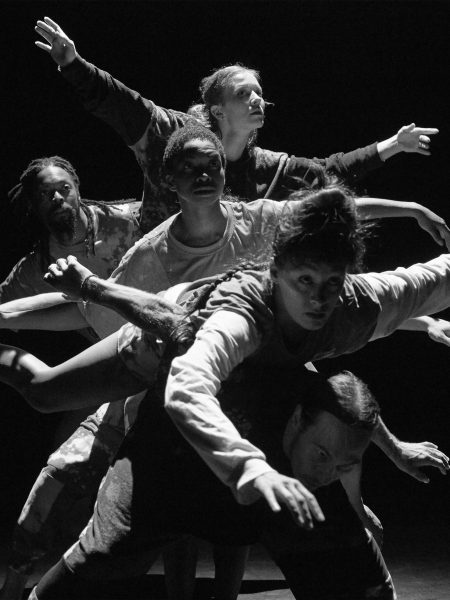 This work, which draws from hip-hop dances and culture, dazzled the members of the Selection committee. Alternating intelligently between chaos and synchronicity, the choreography gives rise to a full, evocative, and decidedly physical dance. Both organic and mechanical, this dance seems to evoke a cosmopolitan lifestyle and reflects our society through the expression of Tentacle Tribe’s performers, whose flair and virtuosity must be highlighted.

Tentacle Tribe is a Canadian-Swedish creative alliance between Emmanuelle Lê Phan and Elon Höglund. Through conceptual hip-hop and influences from all types of earthly creatures, the two artists create uncommon dance works with a contemporary twist. Practitioners of different dance and movement techniques, active participants in the street dance scene, B-Boy and B-girl, and seasoned stage performers, they form Tentacle Tribe. They approach choreography through a wide variety of movement philosophies. They wish to create works that transcend the boundaries separating movement styles, and pieces that express the embodiment of music beyond technique. The work experiments with intricate partnering, refined musicality and a saturated dose of physical choreography. Although having worked together since 2005, Tentacle Tribe was founded in 2012 while the two artists were performing their first official collaboration, a duet created for the Cirque du Soleil stage in Quebec City. Director Natalie Galazkahis adapted this duet into a short film entitled: Elon & Emmanuelle. Their second creation, When They Fall, was premiered at Festival Quartiers Danses 2012 and performed in 2013 in Montreal. The duo has also been hired as an act for Special Events with Cirque du Soleil and Cirque Éloize. Nobody Likes a Pixelated Squid (2014) was presented in about 30 cities in North America and Europe in 2015-16. Marites Carino directed both film adaptations of their choreography: the award-winning dance film Vanishing Points (2014), which was screened in over 50 festivals internationally, and Crack the Cypher. In November 2016, Tentacle Tribe presented Fractals of You with Danse Danse in Montreal. The York University Dance Department and the Arizona State University Urban Dance Program invited Tentacle Tribe as a resident guest artist. After threesixnine (2017), the company is now working on a new full-length production with six dancers that will be completed this year.