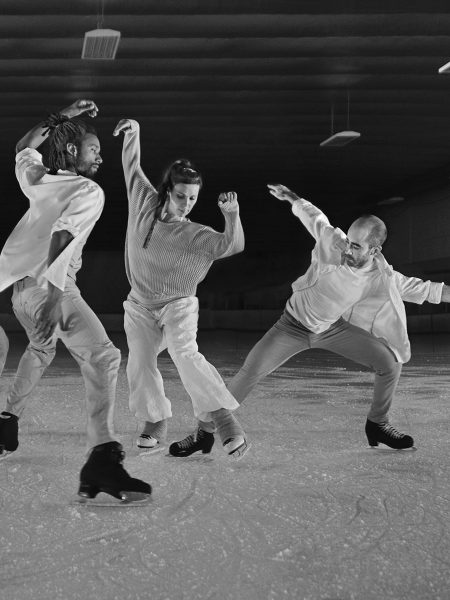 The jury of CINARS sought to highlight the world tour conducted by Le Patin Libre between November 30th, 2019 and June 16th, 2019, where Vertical influences and Threshold were performed in 17 cities in 5 European countries: Island, Norway, Sweden, France, and Germany. With its tour strategy, the company seeks to decompartmentalize the categories of venues and presentation spaces. By performing in two different types of structures, either in performing arts venues or municipalities and/or arenas and skating-rink, it has been able to benefit from the different opportunities each offers and to maximize its dissemination opportunities for the coming years.

Le Patin Libre is a Montreal-based contemporary ice-skating company. This particular performing art discipline uses ice, skates, and glide as means of expression. The first collective was founded in 2005 by former skaters. Glide allows bodies to move through space, surpassing the limitations of common movements: walking, running, jumping, tumbling, etc. According to the skating artists, “That is what we enjoy exploring, to the point of dizziness, for our own enjoyment and our public’s”. This spectacular magic provokes a breathtaking vertigo shared between artists and audiences. Since its first presentations on frozen ponds in 2005, Le Patin Libre has evolved tremendously. What started as a spontaneous outburst is now being refined into a well-thought-out project. This “new skating style” is now slowly becoming a contemporary performance art in its own right.

The development of Le Patin Libre was supported by the world’s leading dance institutions (Dance Umbrella Festival and Sadler’s Wells in London, the Théâtre de la Ville de Paris, the National Arts Centre of Canada, etc.). In 2014, the members of Le Patin Libre made a strong impression with Vertical Threshold, a choreography on ice inspired by major trends in contemporary dance, which was followed, in 2019, by Threshold.

Le Patin Libre is very involved within the Montreal community. The artists generously organize several festive events that transform skating rinks into vibrant community centres, open to all, that bring together the general public, sports fans and art lovers alike. With the help of international partners, every year, they have managed to export this innovative idea to several countries.