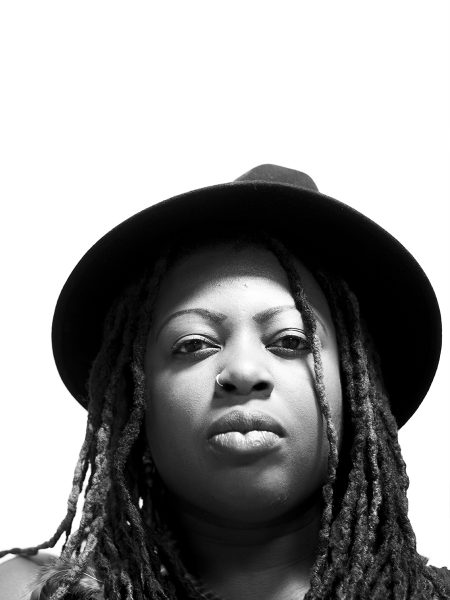 With In-Ward, Alexandra ‘Spicey’ Landé revealed the strength of her choreographic approach. As part of a long-term research project, her artistic and political voice unfolds in a striking and singular way. Still widely unknown (and unfortunately so) by the general dance public, she is a pillar in the urban dance community. Her choreographic signature is closely connected to her artistic allegiances and distinguishes itself by its depth.

A leading figure in the Quebec hip-hop scene, Alexandra ‘Spicey’ Landé has over 20 years of experience, including 10 as a choreographer. She founded, among others, the Bust a Move Festival (2005-2015), a major street dance event in Canada. With her company Ebnflōh, her symbiotic relationship with hip-hop culture becomes the very essence of her artistic signature.

Alexandra ‘Spicey’ Landé began her choreographic career in 2008 with the presentation of Retrospek at the MAI (Montréal, arts interculturels), a pioneering work with 9 dancers, that was awarded with the RIDEAU-Entrées en scène Loto Québec in 2009 and presented in 20 venues in Quebec between 2008 and 2010.

In 2010, she created her second full-length work, Renézance, presented by Tangente and on several occasions in Montreal. In 2011, she was hired to coach urban dance to the performers of the show Michael Jackson: The Immortal World Tour by the Cirque du Soleil and appeared in the Radio Canada TV show Ils dansent with Nico Archambault. She taught at the École Nationale de Cirque de Montréal. During that time, she founded the Bust a Move Festival (2005-2015) in Montreal, co-presented by the TOHU, which grew to become the largest street dance competition in Canada. A four-day event, Bust a Move’s annual draw exceeded 2,500 visitors and 300 dancers ages 16-40 years old, with judges from Europe, the United States and all over the world. This event has been a major influence for the emerging generation of dancers.

Alexandra ‘Spicey’ Landé founded the dance company Ebnflōh in 2015, developing a choreographic language inspired by the origins and the current evolution of hip-hop. She presented the company’s first creation at the MAI in 2015, Complexe R, followed in 2019 by In-Ward, a work for 6 performers, created with the support of several major partners (CCOV, Danse Danse, Agora de la Danse, etc.), that premiered at the MAI gallery from January 16th to 20th, 2019.