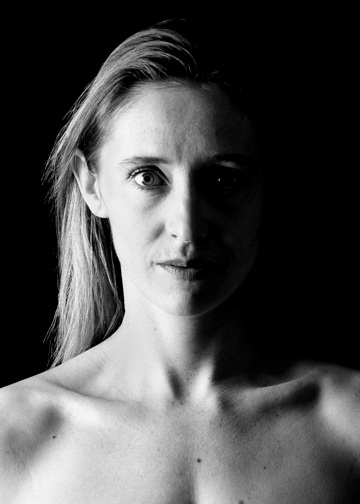 Carol Prieur was born in Paris, spent her childhood years in Ireland, and arrived in Canada at age eleven. After dancing in the Arts Umbrella Youth Dance Company (1985-1988) and at Simon Fraser University (1988-1989), she began her professional career with the Winnipeg Contemporary Dancers (1989-1992). She participated in a number of creations, performing pieces by Canadian choreographers Tom Stroud, Rachel Browne, and Claudia Moore, among others. In 1993, she took part in the Fondation Jean-Pierre Perrault’s Canadian tour of Joe, a collaboration between the Compagnie Jean-Pierre Perreault with Dancemakers of Toronto and the Winnipeg Contemporary Dancers. From 1992 to 1998, development grants enabled her to attend the Pro Series workshop at Tanzwochen in Vienna, to study butoh, ballet, Pilates, and Limón technique in New York, and to be introduced to kalaripayattu, one of the world’s oldest martial arts, in India.

In 1995, Carol Prieur joined Compagnie Marie Chouinard, where she continues as dancer, soloist, and rehearsal mistress. She participated in the creation of works that have become classics of contemporary dance: L’Amande et le diamant (1996), Les 24 Préludes de Chopin (1999), Le cri du monde (2000), Chorale (2003), bODY_rEMIX/gOLDBERG_vARIATIONS (2005), ORPHÉE AND EURYDICE (2008) and THE GOLDEN MEAN (LIVE) (2010). Marie Chouinard created the solos Humanitas (1998) and Étude poignante (1998) for Carol, as well as Mouvements (2005) to mark her tenth year with the company.

The creative complicity between Marie Chouinard and Carol Prieur has also been explored in other platforms. In the film Cantique no 1 (2003), Carol won the best performance award at the Moving Pictures Festival of Dance on Film and Video in Toronto. This work was followed by films Cantique no 2 (2003) and Cantique no 3 (2004), as well as the installation, Icônes (2009).

Parallel to her work with Compagnie Marie Chouinard, Carol has carried out several projects as an independent dancer, participating in the creation of Brain Storm (2001) by Sarah Bild, Interiors (2002) by Tony Chong, Quarantaine (2004) and Terminus (2012) by Charmaine LeBlanc, and Les creux d’un rêve (2010) by Sabrina Reeves and David Usher. She has also danced in and collaborated in the creation of numerous projects with Coleman Lemieux & Compagnie: Where Heaven Meets Earth (2004) in Grasslands National Park, Convoy PQ 17 (2005) in St Petersburg, Russia, community project From Pointe Shoes to Pow Wow (2007), the site-specific Breaking Ground (2009), and Hymn to the Universe (2008).

On a tribute to her remarkable contribution to contemporary dance, the German dance magazine Tanz named her “Dancer of the Year” in 2010.