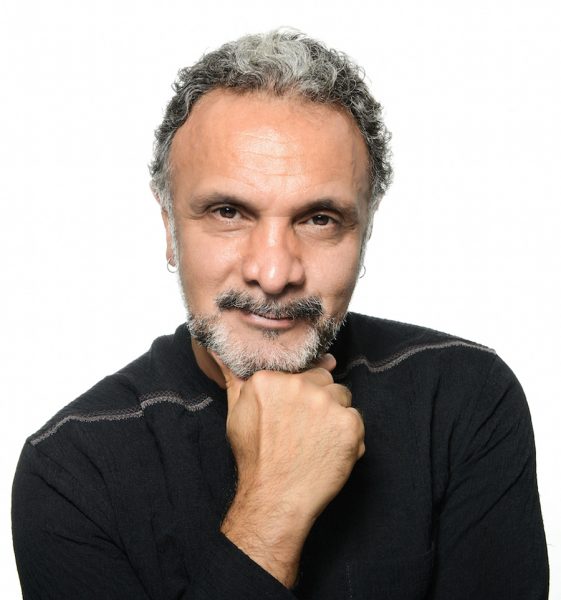 Born in England to an Armenian mother and Indian father, Roger Sinha moved to Saskatoon in 1968 at the age of eight. After graduating from the School of Toronto Dance Theatre, he settled in Montreal and quickly became involved in several collaborations within the blossoming local artistic community. He danced in the celebrated work, Joe, by choreographer Jean-Pierre Perreault, where he forged relationships with such dancers and choreographers as Hélène Blackburn, Sylvain Émard, Pierre-Paul Savoie and Daniel Soulières. In 1991, he formed his company Sinha Danse and began developing a choreographic language that combined his Indian background and Canadian culture. His creations unite bharatanatyam (a dance originating in Southern India), contemporary dance, martial arts, ballet and his own improvisation-based vocabulary. On a tireless quest to redraw the boundaries between the universal and the personal, between control and absolute abandon, Roger Sinha has created over twenty works performed in Quebec, Canada and abroad. His first work Burning Skin (1992), reflecting the violent racial confrontations of his youth, earned unanimous praise from critics and public alike. From there, through such works as Benches (1996), Loha (2000), Thok (2002), Apricot Trees Exist (2004), Borders (2004) Zeros & Ones (2008), Thread (2008) and Asphalt Tango (2014), the artist has given birth to hybrid choreographies that are unquestionably unique. More recently, he has integrated technology and interactive media into his performances.

In 2008, in collaboration with Sandra Laronde of the company Red Sky (Toronto), he created Tono, which was performed at the Beijing Summer Olympics (2008), the Vancouver Winter Olympics (2010), and the Canadian Pavilion at the Shanghai World Exhibition (2010).

In 2009, for the first time, Sinha Danse embarked on a five-city tour of India. In 2013, Sunya met with critical and public acclaim. It featured four dancers and the Montreal musical group Constantinople, directed by Roger Sinha and the Iranian-born virtuoso Kiya Tabassian. The following year, Sinha’s first work for young audiences, Tope là, Tope ci, wifi takka takka dhim, took a humorous and critical look at the themes of intimidation and intolerance among adolescents. In 2016, the choreographer directed the large-scale production MoW! – Montre(olly)Wood, a blend of Bollywood and contemporary dance that featured six professional dancers and some 60 to 80 amateurs aged 16 to 76. MoW! premiered on July 1, 2016 in Longueuil before more than 1,000 spectators, and on October 22 at Place des Arts. .