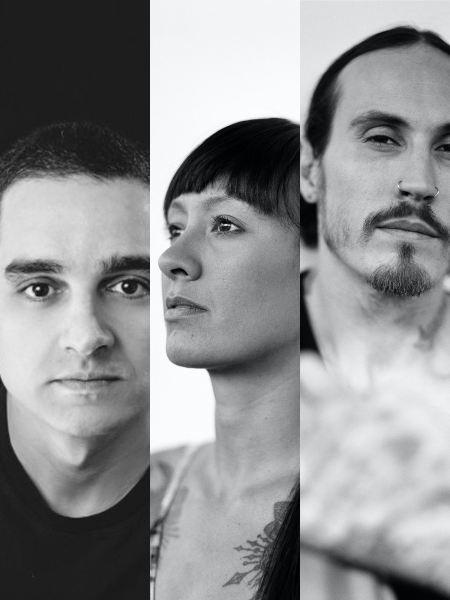 The members of the jury decided to award the Envol Prize ex-aequo to these two companies because it was too difficult to come to a decision.

Destins Croisés, for its ability to create works exploring socially engaged themes that ensure consistency in its constantly evolving choreographic signature. The company’s mission is to contribute to the decompartmentalization of urban dance by strengthening its influence and accessibility. With its creative projects, internships, and choreographic workshops, Destins Croisés has been encouraging the emergence of young talents with multiple practices for over 15 years. The company is also very involved in the community, particularly in Montreal neighbourhoods with a strong multicultural presence, and has made collaboration its preferred tool for development, paving the way for future generations.

Tentacle Tribe, for the fresh perspective brought by this young company managed by the tandem of creators, Elon Höglund and Emmanuelle Lê Phan, which has been a resounding success since its creation. Their research leads them to explore the stage in a theatrical way while maintaining a vocabulary rooted in the foundations of urban dance. Tentacle Tribe is growing and seeks to give back to the community by offering internships and workshops open to all and by welcoming apprentices. If the creation of works is essential to the company, the relationship it wishes to weave with the community is just as fundamental, conducive to meeting different individuals whose respective worlds converge.

Of Franco-Moroccan origin, Ismaël Mouaraki discovered urban dance at the age of 12 in his native region in Nancy, in France. He discovered the contemporary choreographic language with choreographer Xavier Lot with whom he collaborated as a performer for more than three years. In 2003, he founded the company Destins Croisés where he continues his work. His choreographic creation reflects the leitmotif of all his work: to put into motion the infinite facets of humanity. Whether in Loops (2008), the duet Slam en/Corps (2009) in collaboration with the slam-artist Queen KA, the solo RefleXction (2010), Link(s) (2016), or in his latest works, oZe (2019) and Phenomena (2019), his creations are based on the notions of polarities, control, domination and the perception of the individual in the group.

Ismaël Mouaraki surrounds himself with various artistic collaborators whose talent and expertise inspire his fiery vision. With them, he develops a unique signature, rooted in the openness of genres and the discovery of others. From his first hip-hop steps to the presentation of his works in internationally renowned venues, such as l’Agora de la danse in Montreal, the Lincoln Center in New York, the PAMS in Seoul, or the International Tanzmesse nrw in Düsseldorf, Ismaël Mouaraki took artistic and creative risks. Choreographer, dancer and teacher, he works on choreographic commissions in Canada and Europe, teaches in professional training centres such as the École de danse contemporaine de Montréal and alongside renowned choreographers. He participates in various choreographic projects, such as the 5th edition of the Regroupement Québécois de la danse (RQD)’s Pas de danse, pas de vie ! and the Cirque Éloize for the show ID. He choreographed the Pink Carnaval parade in honour of fashion designer Jean Paul Gautier at the Just for Laughs Festival and co-signed the show Ayong with choreographer Herwann Asseh at the Quartz in Brest, France. Ismaël Mouaraki choreographed the show D-Complex in collaboration with the Centre culturel de Namur (Belgium), presented at the Abattoirs de Bomel in 2016. He recently worked with the young circus artists of the École nationale de cirque in Montreal on the piece Pop-Corps, a short work part of the Triptyque program, co-created with Marc Béland and Edgar Zendejas.

Based in Montreal, Tentacle Tribe is a Swedish-Canadian creative alliance between Emmanuelle Lê Phan and Elon Höglund who create, together, unusual choreographies with a contemporary touch in the form of conceptual hip-hop influenced by all kinds of earthly creatures. With Tentacle Tribe, they establish themselves as practitioners of different dance and movement techniques, active participants in the world of street dance, B-boy and B-girl, and finally, stage man and woman. They approach choreography through various movement philosophies. They want their work to transcend the boundaries between different styles and their works to embody music beyond technique. In their creations, they experience a complex partnership, refined musicality and physical choreography with a high dose of energy. Lê Phan and Höglund have been working together since 2005 and founded Tentacle Tribe in 2012. Their first official collaboration was a duet, Body to Body, specially created for the stage of the Cirque du Soleil in Quebec City, which was also the subject of a film adaptation entitled Elon & Emmanuelle signed Natalie Galazka. Their second creation, When They Fall, was presented for the first time at the Festival Quartiers Danses 2012 and 2013 in Montreal. The duo has been hired for special artistic events with Cirque du Soleil and Cirque Éloize. Nobody Likes a Pixelated Squid (2014), their flagship duo, was screened in some 30 cities in 2015-2016 and has been adapted for film in the short films Vanishing Points, screened at some 50 international festivals, and Crack the Cypher, directed by Marites Carino. In November 2016, they created a dreamlike duo, Fractals of You, presented at Danse Danse, incorporating video projections created by artist Gene Pendon. In 2017, the company expanded and transposed its partner work into group works in the pieces Origami Mami and threesixnine, and, last but not least, Ghost, presented last year at Danse Danse. Tentacle Tribe was in residency at York University and Arizona State University and has also created commissions for Dansenshus Oslo and the Vancouver OURO Collective.